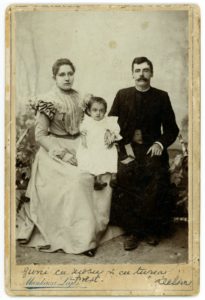 Verso notation:
„(missing text) at the consecration of the ‘Diocesan Boardinghouse’ in Beiuș (illegible) on Octomb 1st. 1899 (missing text) we stood for a photograph”

In composite states, confessional and ethnical fault lines often overlapped to create complex tessellations of national and religious affiliation, while ecclesiastical structures almost always played several different but essential roles, beside ensuring the pastoral care of their communities of worship. In Dualist Hungary, the various ethnic groups that comprised this political conglomerate adhered to a broad palette of denominations, each with its own structures and administration. During the nineteenth century, many Churches also began to function as vehicles for national aspirations, instruments of social, charitable, and often political mobilisation

This project enables historians to examine the confessional and ecclesiastical structures of the Greek Catholic and Greek Orthodox churches in Transylvania during Dualism at the most basic, grassroots level, focusing on the parish and the parish priest.

The database developed during this project encompasses data for the Greek Catholic archdiocese of Alba Iulia and Făgăraș and the Greek Orthodox archdiocese of Sibiu, between roughly the 1850s and 1860s and the first decade of the twentieth century. It relies on several types of sources and intends to provide a fundament for historians researching the organisation and staffing of these two confessional infrastructures.